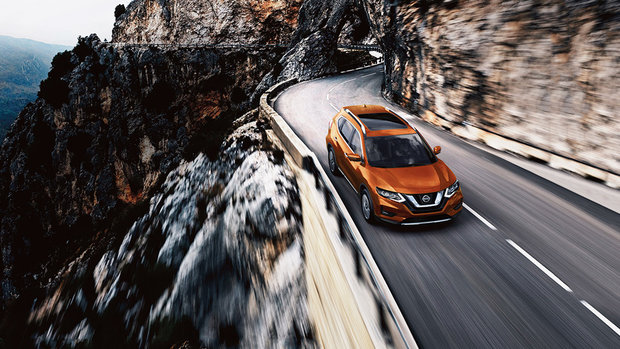 The overall lines are sharper as well on the new Nissan Rogue, and the design is also more refined thanks to new headlights that feature LED accents.

The Nissan Rogue is currently Nissan’s best-selling vehicle in Canada, and it has been like that for a while now. The Japanese compact SUV stands out from the crowd thanks to impressive technology, a host of safety and comfort amenities, and a fuel-efficient engine that also proves capable. And last year, Nissan improved the Rogue with a new 2017 version, just one more new Nissan SUV or pickup in what the automaker dubbed “the year of the truck”.

A NEW DESIGN FOR THE 2017 NISSAN ROGUE

The new 2017 Nissan Rogue looks a lot like the previous generation, but there are numerous changes that ensure that people will know you are driving Nissan’s latest compact SUV. Chief among those changes is the new V-Motion grill which is now Nissan’s primary visual signature. The overall lines are sharper as well on the Rogue, and the design is also more refined thanks to new headlights that feature LED accents. New wheels including 19-inch sets on higher trims, and new color options are also available.

If you take a look at the SL Platinum version, the 2017 Rogue’s top-of-the-line trim, you will notice a plastic screen covering the logo where all of the new Rogue’s active safety technologies are housed. These include adaptive cruise control, automatic braking with forward collision alert and pedestrian detection, and lane departure warning systems as well.

Inside the Rogue, we notice a new flat-bottomed steering wheel along with a new leather-wrapped gear shift lever for the XTronic CVT transmission. A color seven-inch touchscreen is there as well along with a new Sport mode for the XTronic CVT. The new 2017 Rogue’s interior is very much like the new Nissan Murano with an upscale look and premium materials, especially in the high-end SL Platinum model.

Plenty of Available Options in the 2017 Nissan Rogue

Although the SL Platinum is the top-of-the-line model, there are plenty of other versions available in the 2017 Nissan Rogue. Every model is powered by a 2.5-liter, four-cylinder engine that delivers 170 horsepower and 175 lb.-ft. of torque. Front-wheel drive is standard while all-wheel drive is optional.

The base S model comes with heated front seats, a rear-view camera and EZ Flex seating which adds a great deal to the Rogue’s versatility. Other features available in the Rogue include a remote starter, smart key with push-button start, leather seats and power seats for the driver.

The 2017 Nissan Rogue is also one of the only compact SUVs in its segment to offer the option of a third row of seats in order to transport seven passengers. There is a total of 1,113 liters of cargo space behind the rear seats in the new Rogue making it one of the most spacious vehicles in its class.

To learn more about the 2017 Nissan Rogue, contact us today at Vickar Nissan in Winnipeg, Manitoba!