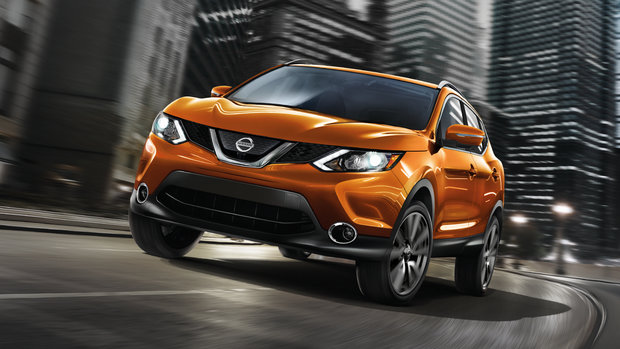 The new 2017 Qashqai has a bold design that is both sporty and refined. More aggressive from every angle, it also features perfect proportions. Learn more!

Nissan unveiled its latest sport utility vehicle at the North American International Auto Show earlier this month, and at the same time concluded Nissan’s 2016 Year of the Truck which gave us a host of new and redesigned SUVs and pickups.

The 2017 Nissan Qashqai may be new for North America, but the model has been one of the most popular vehicles in Europe and elsewhere for years now, and owners here in Canada will certainly understand why when they get behind the wheel.

The new 2017 Nissan Qashqai will slot between the Nissan Juke and Nissan Rogue models. In terms of size, the Qashqai is slightly smaller than the new 2017 Rogue unveiled this year, but showcases approximately the same dimensions as the previous-generation Rogue.

Built in Japan on the same platform that underpins the Rogue, the Qashqai has a slightly smaller wheelbase and height. That said, it still offers 1,730 liters of cargo space, just 200 liters less than the Rogue.

Visually, the new 2017 Qashqai has a bold design that is both sporty and refined. More aggressive from every angle, it also features perfect proportions and a muscular overall stance. Of course, the front grill gets Nissan’s signature V-motion design. Standard wheels are 16 inches, but 17-inch and 19-inch wheels are also available.

Standard equipment will include heated front seats with power adjustments for the driver’s seat, Bluetooth, a rear-view camera, and hill-start assist. Optional features include heated rear seats, navigation, a 7-inch infotainment screen, and a host of active safety technologies that include blind spot monitoring, a forward collision warning, and an adaptive cruise control system.

Power will come from a 2.0-liter, four-cylinder engine that delivers 141 horsepower and 147 lb.-ft. of torque. A six-speed manual will be standard while Nissan’s XTronic continuously variable automatic transmission will be available. Driver’s will have the option of choosing between eco-friendly or sportier driving modes.

We do not yet know the final pricing of the 2017 Nissan Qashqai, but we do know it will arrive in dealerships at the end of spring. To learn more about Nissan’s newest SUV, contact us today at Vickar Nissan in Winnipeg, Manitoba